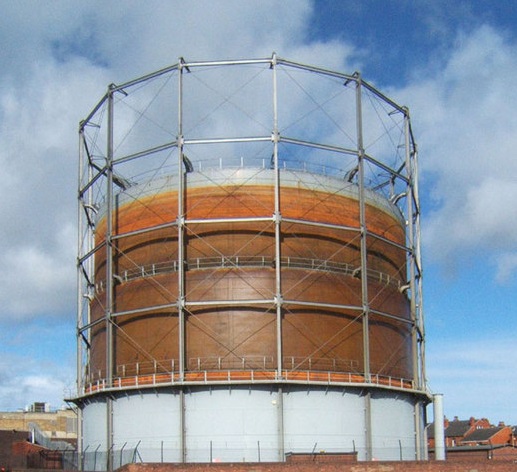 Typical fabricated steel municipal natural gas balancing tank. Used primarily for balancing supply distribution pressure, rather than for storage, these formidable-appearing structures had been typical in many small to large American cities until the 1980s. Most were dismantled due to deterioration with age, as most were constructed during early 20th century.

Basically these devices consisted of a bell-shaped open-bottom enclosure, which rested directly on a base container filled with water, the latter of which extended underground to a level equal to the full height of the bell. In use, natural gas would fill the bell and as the bell would be filled by pipes to a nominal system pressure, the bell would be buoyed, slowly rising or lower within the rigid external structural steel frame surrounding it and guiding the vertical movement with control arms and rollers positioned along vertical tracking guides. The base of water would form the seal between the base wall and the bell surface, thus confining the gas to the internal volume of the bell (in a manner similar to an air-filled glass jar inverted and held into a container of water, trapping the air in the jar). During periods of high city demand, the bell would tend to lower, due to the relative rates of filling and discharge distrubution, but the pressure would be balanced by the floating weight of the open-bottom bell immersed in the base water.

With age, rust typically formed along the external surface of the bell, as shown in the photo. By their appearance, gas holders were not especially pleasant for one to be near. The city of Nashville had only one medium-sized gasholder, while larger cities typically had two or more of such structures frequently larger in diameter and height.